New trends in artistic jewellery are still occurring today as a result of very definite cultural influences and movements, as well as through changes in our social lives. Jewellery is a medium that can send messages.

Jewellery also changes according to the times, just like the changes that have taken place in the modern period in architecture, literature, painting, sculpture and furniture design. The search for constantly new means and ways, style trends from or characteristics of various countries. Influences from one country to another. Absorbing, breathing in ideas and developing them. One to the other. Possibilities – with different kinds of materials.

Jewellery has developed more in the past 40 years than virtually any other artistic field. I, too, have been able to contribute to this.

In 1967 I was employed by Andrew Grima in London as a goldsmith and ended up staying in England for three years. In 1969 I was put in charge of the ornamental watch collection for Omega at Andrew Grima. Subsequently, I started to get interested in working with contemporary jewellery. I was mainly influenced by Stella Liechtenstein, Jim Dine and Trova, but also by the many colours of London, which contrasted with the greyness of daily life in Vienna. Here, in England, I succeeded in emancipating myself from the prevailing attitudes to jewellery and gradually began to implement my own ideas. Jewellery became a medium for me.

I had a means of sending messages and signals via the wearer, who was then forced to adopt different attitudes. Jewellery as free form and visual impact. My first acrylic and precious metal works came into being.

I made the acquaintance of or became friends with Reinhold Reiling, Claus Bury and Gerd Rothmann, as well as with David Watkins and Herman Juenger. There was also the opening of the Electrum Gallery in London.

In 1975 I became the owner, with my wife, Sandra, of an old farmhouse in the southern Waldviertel, a wooded area in the country, north of Vienna. Working in the country means an opportunity to work in harmony, focusing on what one has experienced and expressing it in one’s own particular way.

I try to show jewellery not only in small, but also in larger dimensions, to present the form more clearly. Among my works is a sculpture I was commissioned to do in 1986 for a fountain in Kagran, a suburb of Vienna.

Colour in my work meant a great deal to me in the seventies. Colourful London, the brilliant colours of the plastics of the hoardings in Soho, neon signs at Piccadilly and my profession as a jewellery-maker in London – a symbiosis of colour, gold and silver. My first independent pieces of jewellery were created. Cheap materials of daily use (acrylic glass) contrasted with precious ones. From that point on, this became an aspect of my work. What is relevant and most important to me is the inner, really true value of the material I am using. It should show its true characteristics: a clear, provocative statement without any compromises. Tin is pliable, plastic colourful and gold as strong as steel.

After working with synthetic materials and precious metals in the seventies, by 1980 I was expressing my ideas in tin and gold. Pure tin is very soft and the person using it as jewellery can wear it in numerous different positions. I worked small segments of gold, the function of which was to hold the jewellery in place, into each piece. In 1988 the Victoria and Albert Museum exhibited works showing the impressions of my then two-year stay in London in a personal exhibition.

I create my works as independent as small sculptures and to be hung on the wall to bring them closer to their audience. Jewellery should not be put away in cases, but kept where it is visible when not being worn. The relationship between an item of jewellery and the wearer is intense, which means that it is worn both consciously and with emotion at the right moment. Thus it passes on its signals and messages.

I am aware of the fact that I also demand a certain prerequisite of strength from those who wear my jewellery and risk attracting a good deal of attention. It is considerably easier to mention that you have a Picasso at home than to explain why and how it is that you are wearing precisely this item of jewellery. For these reasons, it is always important to me also to make larger objects and sculptures which accentuate the forms from my world of jewellery. Jewellery thus becomes an artistic medium which enjoys equal rights with painting, sculpture and architecture in imparting messages which include certain aspects of our environment and the discussion they involve.

Understanding the quality of jewellery, appreciating it and fathoming its point demands no less attention than is needed to express an opinion on a painting or any other form or art. Jewellery can, however, be much more. It can be integrated into fields such as fashion, furniture or theatre. Yet jewellery artists all have their own independence, their own messages and intellectual references to form, material and themes.

I would like to make the following comments regarding my own work: just as letters are symbols which are joined together to form sounds and finally, in their entirety, form language which is communicated to others, I interpret my jewellery objects as signs of an inner order which I, myself, have created and which I attempt to impart to others as well. In order to go beyond this attempt to be understood, I need to feel a certain degree of sensitivity on the part of those who experience my work. My language is not codified. I constantly create new words which develop out of impressions throughout my life – out of my quite subjectively felt present and past. My language is formed from reflection on what I have experienced first-hand, from phenomena and perhaps also from yearnings in the daily world. Themes and priorities can change in the process. What „concerns“ me needs to be transported further, not in words, but fixed and made touchable. In stable signals – to be worn on the body. It is my hope that those who wear my jewellery will grasp my message and become transmitters of my thoughts in my artificial language.

This was also the situation in my last computer works, „The Ring“: the stressing of numerous insights through division and adjustment. Here, too, once again: other means and possibilities produce new messages. The new tool is the computer screen. The goldsmith’s craft is not only defined by the file and hammer. Artistic ideas may also be expressed on the computer „drawing-board”, where it is possible to gain new impulses and to utilize its practical and theoretical possibilities. Computer graphics help me to describe this path through my imagination. I have the opportunity to represent the shapes and dimensions onscreen, where I can scrutinize them – in a form which is, to me, absolutely real.

Some years later, in spring of 2013, there was a three month stay in Cherasco, Italy – from there only on a few clear days a year it is possible to see the Monviso – a mountain of 3.800-meter height! This is very impressing because it looks like this magic formation high up in the sky and in my imagination it might just one day fall into the old town! Therefore, I ended up painting it and later on making brooches out of paper.

For the past two years I have been making wall-objects and jewellery which depict real and imagined mountains out of iron with industrial enamel. This project started in 2015 in the “Künstlerwerkstätten” in Erfurt, Germany where I was accepted to join a group of international artists and to take part in their workshop.

“My” mountains came into being. 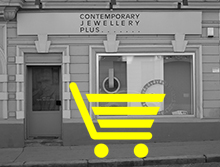